It's been a quite 2 months in sesame seed markets , with prices staying mostly stable.
Korean tender was announced on the 26thApril and India got 4800MT while Africa took 1200MT. Interesting to note that for the Machine clean Premium Quality the whole quantity went to India.

The question on everyone's mind now is that despite the Korean Tender going India's way why are the prices not rising , Infact they are falling a bit. I wouldn't say dropping because 4-5% change in prices on a week to week basis is very normal movement in commodities now.

My own observation in the recent times has been that just before the Korean Tender prices stay firm or rise in anticipation of something big but after the Tender is announced they tend to slip a bit. In some cases if India does not get the desired quantities its pretty obvious that prices will drop , however in cases where we do get a big chunk , like this time, prices still don't shoot up ,WHY?

Well I think its mostly because the shipper's get busy preparing the cargo for exports and stop or delay fresh buying unless they were short , which in this tender was not the case. Everyone had stocks and were clearing their cargo rather than speculating. However once you get everything packed , checked and cleared its pretty normal and obvious that they will come back for some more shopping.

With almost 5000 MT of Inventory cleared up from the market I would assume these players would surely come back to cover atleast 50% of this next month when the gujrat summer crop starts.

The stocks in india have gone down drastically. In case of Hulling industry I think only a few have raw material in excess of 300-400 Mt or just about a months Raw material. However there are still some stocks in Gujrat of the Imported cargo which is on offer to the highest bidders anytime. New Imports have practically stopped due to high prices in Africa.

As expected Africa would continue to wait till the Ramadan demand in June-July before any panic selling starts there and by that time it would have been too late for India to import anything owing to the
long transit times ( 45 days to 2 months)  and previous issues with quality and delivery from Africa.

Im my opinion we should almost exhaust all stocks and raw material by end of Aug-September even if the demand remains really slow and exports fall dramatically.

Just as we mentioned in our last report , there have been jumps and then correction's thereafter in the past few month. All this of course have been because of profit bookings by almost every exporter.

I think this trend will continue in the months to follow till next new crop in September-October however what can change is that most of the people will exhaust their stocks pretty soon and close down. At this moment as well i assume almost 50% of the hulling factories have already taken a shut down and more will follow suit if the situation continues.

If the prices continue to remain high till season end and the next new crop is delayed or is bad we expect prices to stay firm for the next season as well. With complicated import rules and with a lot of financing involved the Import of Sesame seed is only limited to a few people in India and is not lucrative until unless the price gap is big enough. Importing for re-export also means a lot of speculation in terms of Quality , Delivery period and Price fluctuation which is never the basis of a good business model.

Overall i believe that there are some good bargains in the market available at the moment for people who wish to empty their stocks and move out however looking at the long terms picture from May till September period I do not see any big fall or corrections in the prices at the moment unless of course Africa comes out aggressively and drops its prices and some hidden stocks suddenly appear in the Indian market.

For Hulled and Sortex Clean Natural India still remains the preferential and logical destination and Africa will still have to work hard to catch with the Infrastructure and Technology available here.

Unlike in 2007 or like in other commodities prices of Sesame have remained Range bound over the past few months which is a good thing as the importers and their customers now have gotten used to the current price levels. For Hulled sesame the price of $2700 does not look unrealistic anymore and if the prices are corrected by a  few hundred $'s for a short time it would seems attractive enough for a lot of customers to cover their needs.

I would have been worried if the prices had shot up above the $3000 levels , where the pull back would have been very sharp and chances of loosing a lot of money were high. Overall I think its important to keep a watch on the markets for May-June period and cash in on any bargains for short term and it would be important for the importers to plan their demand-supply till End October because I doubt the new crop will be available in their warehouse anytime before that.

I never hesitate to tell a man that I am bullish or bearish. But I do not tell people to buy or sell any particular stock. In a bear market all stocks go down and in a bull market they go up.

However looking at the water/rainfall situation it looks that in most certainty it will be a very bad crop and with stocks in India at all time low and with no chance of big shopping from Africa anymore i wonder how India will continue its supply for the next 5 months before the next new crop in Sept-October.

Attached a Rainfall data for Gujrat for the last 1 Month. As you will see there is absolutely zero rainfall in all the districts and I wonder how farmers will make the sowing in such dry weather with irrigation facilities also failing. 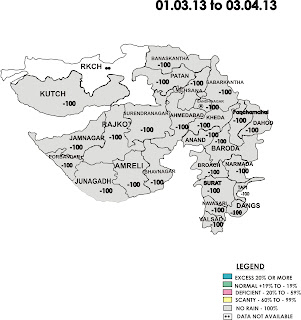 Sesameseed
I am the DIRECTOR of Shakumbhri Expo Impo Ltd ,one of the oldest and leading processor & Exporter of Premium Quality Hulled Sesame Seed. We believe that transparency always helps you make the right decisions and that is why I am here posting my thoughts. We at SHAKUMBHRI do not believe in poaching and spamming so you will not find daily prices and reports here. Please visit our website to know more www.shakumbhri.org Mob :- 0091-9837084355 Skype :- mukulgupta78