We take this opportunity to thank you for visiting our Booth at 'ANUGA 2011' Germany.

It was a pleasure meeting you at ANUGA and discussed the business prospects.

Just to give you an update, the new Sesame Seed crop has harvested and arrived in the market. We were expecting the prices to go down on arrival of the crop in market but we do not see that happening.

Our Association got a survey done and the crop is estimated to be around 300,000 Mt , some people still feel the numbers are high but since the sowing area did go up in UP and Rajasthan and rains stopped just in time before it could do any more damage we could be close to this number.

That said the crop is still short as compared to the previous years and the stockists are bullish. However since a lot of panic was created in the market before the harvest a lot of business was done for the old crop and that means that the actual demand could come in a little late than anticipated.

Sudan crop is projected to be smaller as well and so is china. However China we believe have good stocks at the moment and they can afford to wait a little longer for the african crop to come in before they step up their buying.

Considering all the variables & the volatility and as company policy of not speculating we suggest cautious buying and we think that it is better to try and make
a good average rather than wait for the bottom this year.

In Hulled we think there will be stiff resistance around $1700 FOB and $1900 FOB this year as well. If and when the prices do cross $2000 levels we expect a bull run upto $2400FOB after that.On the lower side we believe that $1650 FOB -1700 FOB should be the bottom for Premium Quality Hulled.

Not a lot of people have gone long this year ( buyers and sellers) and that should keep everyone busy all year round.

We look forward to your support and business.
Posted by Sesameseed at Thursday, October 20, 2011 No comments: 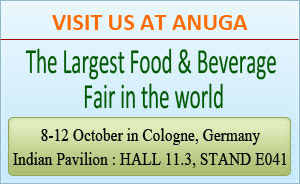 Posted by Sesameseed at Saturday, September 24, 2011 No comments:

It’s that time of the year again when we spend more time on the internet searching for news about sesame than actually buying/selling it  Here is my contribution to the search.

After a very dull and boring 3 years we finally have some movement and excitement back in the trade. Prices remained almost stable over the past few seasons, moving within a set price band.
What will be the Indian crop size this year? How much is the carry forward stock?
How much will China buy? How is their crop?
What is happening to the crop and prices in Africa?

These are a few nagging questions in everyone’s mind along with of course the most important question “ What is the RIGHT time and PRICE to buy” . I wish I knew the correct answer to any of these question (It sure could make me some money) but unfortunately I don’t so we play the guessing game like always. All of you probably have the numbers and figures from elsewhere but here is my version.

1:- CARRY OVER STOCKS :
Last year the crop was estimated to about 350,000 MT + we had about 70,000 Mt in summer crop that makes it around 420,000 MT crop in the past 11 month. The exports from India did increase substantially and between April 2010 – March 2011 we exported about 340,000 MT.
If we take the export numbers between Oct 2010- September 2011, I think it should be roughly the same as well . This means our carryover stocks should not be more than 30-40,000 Mt at this point of time. ( I know the numbers don’t add up but assuming that India exported a lot of hulled , I am adding 20-25 % extra for the raw material yield loss in making hulled Sesame )
So the carryover stocks are nothing big if you distribute it between 100’s of small stockist who are probably holding onto 50 or 100 mt each , and these are stubborn cash rich stockist who will not sell the cargo unless they are making good profits.
That means irrespective of what price is India will have enough sesame to keep their factories running and exporters busy till new crop arrives around Mid of October.
No comments on the Quality though.


2:- NEW CROP :---
hmmmm...20% less...25-30%..i’ve even heard the number to be 40%-50%. Which one will hold true we’ll only know when the full crop is harvested by end of November. However if i were to put a number i would say less by at least 30-35% . It’s been raining cats and dogs in some sesame growing regions of Gujarat and Rajasthan even till last week and that is bound to created damage.

UP and MP sowing was very promising to start with but as rains played spoilsport we heard many farmers gave up on sesame crop. Just last week there was a report that Soyabean crop estimates in MP were revised downward due to rain damage, my guess is if soya crop is damaged due to rains the sesame plant surely will be as well. However since the sowing area had increased whatever damage we had was compensated to quite an extent. So if I had to put a number on the crop i would say
Last year 340,000 – 35% =220,000 Mt . I would assume anything between 200,000 -225,000 in realistic terms.

We’ve had a very good monsoon this year, which usually means a very cold and good winter season so the domestic consumption of sesame should be healthy this year as well. But that apart the mere fact that the crop is less with get the stockist and traders back in action and huge crop will end up in stocks creating an artificially void or demand when the new crop arrives.


3:- SITUATION IN THE PAST 3 MONTHS
Prices in Indian rupee terms have gone up by almost 20% in the past 3 months , all the stockist which were sitting on high prices cargo and contemplating losses got a chance to exit and that renewed their confidence that if you wait sesame stocks ultimately pays back. This confidence im sure will come into picture when they are active again during the new crop.

The USD has been very strong , up almost 8-9% over the past 2 months which have made the prices in $ terms look not that dramatic , however this could change very quickly is the rupee is stronger again , not to mention that ocean freights have been rising slowly and steadily as well and tend to peak during the Nov-Feb period.
The Korean Tenders as well all know is now part of the export numbers from India . With the complicated payment terms and strict quality and delivery schedule it is unlikely that Africa will we participating aggressively . So keep aside about 50,000 MT for the Korean Tender from this crop.

CHINA...Will they buy...ofcourse they will , when , how much , at what price , i don’t know but they have too. They have found out a way to get the Hulled into china from India and the numbers can only grow this year. Their crop is estimated to be slightly smaller than last year and the demand continues to rise. If prices go up in India , same will happen in Africa as well ,infact over the past 2 yrs African prices have always remained above India and there is no reason to belive that they will sell at a discounted prices this year. So if the difference between Indian and African prices remains China will continue to cover part of the requirement from India as well.

4: - GLOBAL SCENARIO
I’m no expert on African crop but from what i have heard they have just enough stocks to work with till their new crop arrives and with no significant increase in sowing area and not so favorable climate in growing countries I presume that their crop size will not be any bigger than in past.

The buying pattern though seems to have changed over the past few years. Earlier we saw that the buyers would almost stop buying from July/August onwards and would finish all their stocks by September/October and then come out aggressively in Oct-Nov to cover, now they are buying old crop all the way till October shipment. It has partially to do with the growth of infrastructure and machine upgrades and partially as everyone wants to work back to back now, rather than keep open positions for too long. This means we might not see the mad rush to buy on new crop as most Indian stockist and exporters are anticipating. However it is also true that most destinations are not holding big stocks and will have to buy regularly.


5:- BULLISH YEAR
Certainly looks like one. Most exporters will not sell too far forward this year , they did that in 2007 , almost all Indian exporters honoured their contracts , even though they local suppliers defaulted , but after 3 boring tough year I doubt they are in the same state of mind.

I’m sure there are some eager beavers who would want to speculate and sell forward with open contracts but I assure you if the prices jump the way they did in 2007-08 we will see a lot more defaults that we did back then. So pick and choose your supplier carefully.


Conclusion:
We expect the market to remain firm & bullish at least till the new crop arrivals start coming in. With Diwali this year on 26th October I don’t expect the volumes to pick up before that. That also makes it very tricky, if the arrivals before Diwali are small , most people would assume that they will increase up after Diwali and will wait but if the arrivals don’t increase significantly then KAAAAABOOOOM  Hard choices , hope you make the right one.
As usual, currency fluctuation is a vital influencing factor.
Posted by Sesameseed at Thursday, September 15, 2011 7 comments: 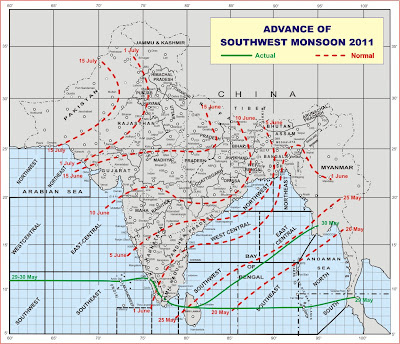 From the predictions once again the Govt says the monsoon is on time...will be normal etc etc . They love to paint a rosy picture but the past has taught us that more often than not they are wrong with their predictions.

You find below the actual Monsoon progression as on June 1st. Its running a bit late and with the intense heat and dry weather through out the sesame sowing area ( I was in gujrat , MP and U.P ) the field are empty and dry and will need a few days of rains before the sowing can start.

My feeling again this year for the crop to be a little late. Will keep the blog updated for anymore developments
Posted by Sesameseed at Wednesday, June 01, 2011 1 comment:

Sesameseed
Director at Shakumbhri Expo Impo Ltd ,one of the oldest and leading processor and Exporter of Premium Quality Hulled Sesame Seed. We believe that transparency always helps you make the right decisions and that is why I am here posting my thoughts. We at SHAKUMBHRI do not believe in poaching and spamming so you will not find daily prices and reports here. Whatsapp :- 00919837084355 WeChat :- Mugupta78