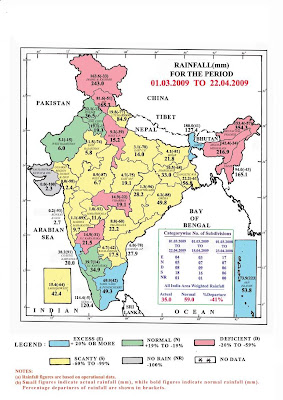 Gujrat has had the driest March/April and there is almost a drought like situation there.
Posted by Sesameseed at Monday, April 27, 2009 3 comments:

As most of you would already be aware by now that a Korean Tender for Natural Sesame Seed was announced last week on the 24th.

India got 4800 MT in the range $1343 PMT - $1363 PMT. The balance 1200 Mt was awarded to Pakistan.Once again notable absence of African participation. The prices in Africa as still on the higher levels and with limited stocks there are well they do not seem to be in a hurry to sell cheap, specially when they know the fact that any revival of demand from China or the Ramadan demand has to be catered by them as no other origin is in a position to offer huge quantities.

The tender price is very smartly based on the anticipation of a good summer crop in India , as these levels do not match the current prices in the market we doubt that it was a discounted sale of stocks. The new summer crop arrivals should start to trickle in the first week of May and as the arrival pressure pick up we should see some price corrections. However we don't expect a free fall in prices in May as the initial arrival pressure will be eased with the buying for the Korean Tender which needs to sail out by next month end.

Everyone is now talking about a big summer crop , but as we mentioned in our previous reports the stock situation other than the Summer crop is very small. Everyone is waiting and counting on the summer crop and that optimism should act as a potential barrier in free fall of prices.

Moreover African exporters seem to be in no mood of offering a huge discount anytime soon and that could help keep international price level at sustainable levels.

A few more Korean tender will surely be announced before the Indian new crop in September and that means at
conservative levels about 15,000 Mt ( Including the current tender )from the summer crop will be dedicated to the
Korean tender alone.Which leaves us with about 25-30,000 Mt at max for rest of the worlds supply.However with
current demand at historical lows we still do not see any huge buying rush specially in the summer months.

Its been a boring year , just as we anticipated in our report at the start of season in November.There seems no reason that the next 4-5 months will be any different.However the buyers should be careful as ultimately the end users are consuming , if they are not supplying then probably their competition is.

If price is a deterrent in the sesame consumption , then I am hopeful that people will either learn to live with the high levels or the prices will fall in the coming new season in October. If other substitutes have replaced the use of sesame due to low prices will have lower cushion for a fall compared to sesame and that means at lower levels sesame will not just regain it demand but should also take market share of other substitutes just as they have taken its.

What has been interesting this year is that the market has been very range bound , moving 3 steps forward and
then 2 steps back , the same story should continue in the coming months as well. This should bring stability to the prices and with a narrow band to move in the client confidence should resume and we hope to see some cheer back in the market.

Will be very interesting to see the actual size and impact of the summer crop in the coming few weeks.

USD still remains a major price determining factor as we have noticed in the recent past..
Posted by Sesameseed at Monday, April 27, 2009 No comments:

In continuation to my last report , prices have maintained their lateral movement in the past 2 months since our last reportof end January. Contrary to many people's thought of a market crash we thought that their were certain factors which provided stiff resistance at lower levels.

The prices did go up however do the same factors but the strong USD which traded in the range of about Rs 52.00 = 1USD in comparison to the Oct- Jan average of about Rs 49.00 =1 USD helped make the prices look that much cheaper.The USD in the past 2 weeks has weakened again and is now trading in the range of Rs 50-50.50 =1 USD which again makes the same prices as 2 weeks ago look 3-4 % expensive.

If February a small Korean tender helped move the prices up suddenly even though the bidding prices from India were below everyone's expectation. But once again the absence of competitive prices from Africa which is confirmed to have good big volume crop this year prompted everyone here that there was still scope of absorbing a $100-$200 rise in the international market.

China everyone said will not be buying this year and infact they bought very little since the season started in October,
but as we mentioned in our last report that China may be back for shopping after their major demand period of Chinese New Year got over. The strong buying spree from China in Feb got the prices moving up in Africa as well and after a certain level the demand stopped , clearly showing that the markets this year are very range bound.

Talking to a few of my Chinese colleagues , I learnt that the demand is slow but not down and out in the Sesame Oil business, ofcourse with high prices a certain segment of buyers have switched over but the fact remains that "Nothing is Permanent , not even CHANGE". People switch and then they switch back. A very interesting point as despite this talk of global slowdown and falling commodity prices , the prices of 90% of food items have still not been able to see the lows of late 2007 when this sudden and maddening rise of prices started.

We have all heard of low stocks in India for the last 5 months , low inventory , stocks in the hand of strong stockholders ,stocks at high levels are old topics now. The current buzz word in India nowadays is the Summer crop. I am sure their are all kind of figures already in the market about the size of the summer crop.I've heard estimated ranging from 50,000/Mt to our estimates of about 20,000 MT.

Working of some figures again. Considering that average yield per hectare in Gujarat for Sesame is about 400 Kgs/Hectare that means we need about 2.5 Hectare for 1 Mt of Sesame Seed. For a crop size of 50,000 Mt we would need a total area under cultivation of 2.5 X 50,000 = 125,000 Hectare. This figure looks a little unrealistic as compared to the normal sowing area under production in Gujarat which is about 350,000 Hectare.

Since there have been almost zero rains in Gujarat since Jan 2009 upto March 31st 2009 , some people may argue that summer crop is primarily sown in Irrigated lands with little or no dependence on Rainfall as in the case of normal season crop which is sown in June/July after the first monsoon rains in India.However being situated in a farm area we think we know a little more that people sitting in big cities that such a huge area in India to be cultivated by irrigation is close to impossible and that too for such a high risk and sensitive crop.

In our estimate the crop should be more or less similar in size to previous years with a little sustainable growth pattern and should be the range of 20,000- 25,000 MT. We must also recognize the fact that all of this is not for hulling. This crop will get divided into 3 parts
1:- 99/1 Premium Grade for Natural Export
2:- Hulling Quality
3:- Crushing Grade

Lets say the Hulling grade in this is more 50% or about 20,000 Mt . Assuming that only 10 factories(Big small , Auto/Sundry put together ) will run for the next five months from May-September i.e about 150 days.Taking into consideration that the demand is down and there is a major slow down the factories are bound to run at about 60% capacity or lets say they will produce for only 100 days in the next coming 5 months.

If less than 10 factories operate out of India , then doesn't that create a situation where the suppliers will have an upper hand in determining the prices and choosing the buyers anyways.If 10 or more factories run even at 60% capacity doesn't that account for this summer crop figure in total.In both cases we see a bottom line resistance being formed.

Where is the spare quantity to pressurize the market to crash? Its not that India needs to finish every last seed before the new crop as a compulsory rule or law.Every year we have carry forward , nothing new if we carry fwd 5-10,000 Mt.

Even if this year the April-September figures are down 50 % on low demand , we still would need about 50,000 Mt. We don't see a huge stock situation in India at the moment as even after the price rise in the past month the arrivals did not pick up , some people would say that the stockiest are awaiting for even better prices which may be true in some cases but what is also true is the fact that most stockiest have emptied their warehouse cutting their losses and gearing up for other new crops.After the sudden rise we even saw a 6-7% price correction but even then there was no panic selling by stockiest and no improvement in prices clearly showing that the supply is very very limited.

If all the overseas buyers are running in limited stocks and the demand has been slow over the past 6 months , I think the stockiest in India have been just as smart to realize that fact as well and there is no reason to assume that the stockiest will still hold on to huge stocks and loose their night sleep and money despite getting a chance to exit at breakeven or even at small profits in some cases over the last few weeks.

Some new origins in Africa and Central America will also be coming out with new crop in the coming 2 months but with the strong USD still trading above Rs 50 - 1 USD and at high prices worldwide the import parity and chances of India importing any more raw material is virtually zero. Hulled Sesame from India still remains the cheapest and limited.

Just as we anticipated a Chinese demand after their New year , we anticipate another buying spree from the Middle Eastern Countries and Turkey for their Ramadan demand which falls in August this year much before Indian new crop so all their demand will either be fulfilled by stocks in Africa or Indian Summer crop.

However the USD still remains a major price determining factor and any downward movement from current highs will only make matters worse.
Posted by Sesameseed at Thursday, April 02, 2009 2 comments:

Sesameseed
Director at Shakumbhri Expo Impo Ltd ,one of the oldest and leading processor and Exporter of Premium Quality Hulled Sesame Seed. We believe that transparency always helps you make the right decisions and that is why I am here posting my thoughts. We at SHAKUMBHRI do not believe in poaching and spamming so you will not find daily prices and reports here. Whatsapp :- 00919837084355 WeChat :- Mugupta78